SOUTHERN INDIANA — As Indiana lawmakers meet for a special session, a number of Southern Indiana residents are protesting the proposed abortion legislation.

This week, legislators are considering legislation that would ban most abortions with limited exceptions, including cases of rape, incest or a life-threatening pregnancy. On Monday, crowds gathered at the Indiana Statehouse to voice their opinions on the issue.

Willman said she wanted to let state legislators know that “a lot of women in Indiana are upset.”

“We are not for abortion, but we are for women’s right to choose — there’s a big difference,” she said. “I’m afraid they are going to take away more of women’s rights.”

Sipes said she was relieved that Indiana Republicans have proposed exceptions to an abortion ban, but she “prefers women to make decisions about their own lives.”

She was pleased to see so many people expressing their opinions in Indianapolis, saying she saw people of all ages at the protest.

Stodgill worries about the possible repercussions of an abortion ban.

“Women are still going to get abortions — that’s a fact, and I worry about their health,” she said.

Willman acknowledges abortion is a divisive issue, saying people in her own family have differing views on the topic.

“I think it’s important for women to stand with women and support their rights,” she said. “It’s not going to stop at Roe.”

“We would like our legislators to listen to the majority of their constituents and vote to represent their position instead of their party affiliation,” Willman said.

See PROTEST on A3 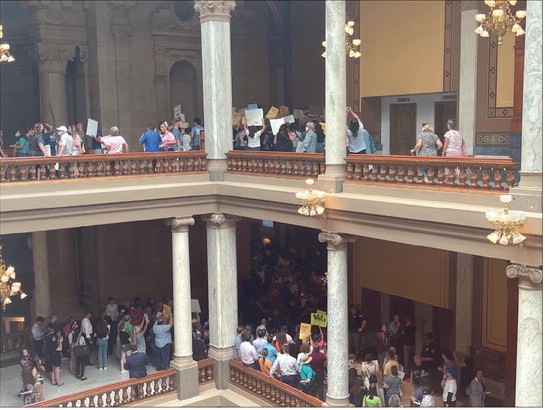 The Indiana Statehouse was filled with protesters Monday as legislators meet for a special session to consider a proposed abortion ban.

Katie Forte, Democratic candidate for District 47 in the Indiana Senate, also joined the Monday protest in Indianapolis to advocate for abortion rights. In a news release, she said the state has a “big government problem with the supermajority at the Statehouse.”

“I believe we all do better when we empower people to make the best choices for themselves and their families,” Forte said in the news release. “SB 1 is so severe that even a person who has a miscarriage can wind up having their care restricted based on the extremist politicians wanting to score political points. Make no mistake, this bill takes power away from people with uteruses and gives that power to the Indiana Republican supermajority. That’s not an Indiana that most people I know want to live in.”

Forte is running against Republican State Sen. Gary Byrne, who did not respond to the News and Tribune’s request for comment as of publication time.

Nick Marshall, Democratic candidate running for District 45 in the Indiana Senate, did not attend Monday’s protest but expressed concerns with the abortion legislation. Marshall is running against Republican incumbent Chris Garten, who did not respond to the News and Tribune’s request for comment as of publication time.

Marshall said he believes it should be a woman’s choice whether to have an abortion, and instead of the legislation being decided through the ongoing special session, he believes “we should let the people decide in November” as voters choose who will represent them in the Statehouse.

He worries that anti-abortion legislation would “affect our Brown and Black population the most,” as well as people of low socioeconomic status. He focused on issues of maternal and infant mortality, emphasizing that people of color are more likely to experience health care crises when having a child.

Adam Dickey also attended Monday’s protest, saying people showed up in big numbers wanting to be heard, including people from Southern Indiana. Dickey serves as chair of the Floyd County Democratic Party, chair of Indiana’s Ninth District Democratic Party and member of the New Albany City Council, “I’m standing here in the midst of a crowd of individuals who are obviously upset and feel like their rights are being taken away,” he said. “They feel like their health care is being put in jeopardy.”

Dickey said the issue of abortion has been portrayed as “some sort of black and white issue when in reality it’s much different.” He described the Republican supermajority in Indiana as pushing an “extremist agenda.”

“We need to get back to solving problems that really concern Hoosiers and stay away from divisive arguments that endanger women’s health,” he said.

He said “having the right to your own health care is critically important,” and “it should be a woman’s choice to make in privacy with her family and her doctors.”

“It’s not a black and white issue,” Dickey said. “It involves people’s health. We don’t need a forced birth law — we need to allow individuals to make their own choices.” 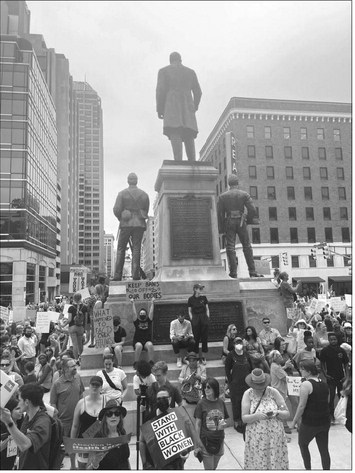 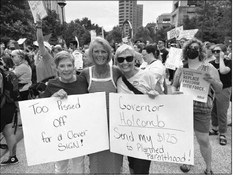 Janey Willman, Connie Sipes and Julie Stodgill (left to right) were among the Southern Indiana residents who traveled to Indianapolis Monday to protest the proposed abortion ban under consideration by Indiana lawmakers.

Click here to see this page in the eEdition: